Interviews after winning bronze at the Women's World Junior Championship 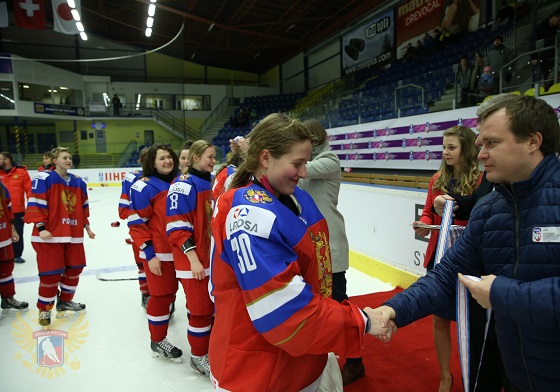 - Having started the match poorly, we spoke in the break and changed our game. We started attacking more, in the second period we outshot the Swedes 13-1. Finally, in the third, we scored.

- How did you feel as captain?

- It was my final World Junior Championship, I felt a lot of responsibility. I tried to be a leader in every game.

- I am really happy that we won, I have so many emotions! It was tough for me in the third period, Sweden attacked a lot and I did everything that I could. It's fantastic, everyone is calling and sending messages to me. My parents sent me the first message, saying that we did a great job.

- How did the chaos against the Czech Republic affect the team?

- That situation fired us up even more. It's really good that we managed to take a medal.

- I am happy that we won the bronze, it's my first medal at international level. I have only positive emotions! I can't even describe just how happy I am.

- You missed the semi-final because of suspension.

- That gave me even more motivation. I was really annoyed that I was given a one match suspension, today I wanted to show my potential. I can say that I gave my all and now I can have a rest.

- Did you feel that you had a united team?

- Yes. At every game during this tournament, we became even more of a solid group, the girls fought for each other. We understood how important this match was.

- What were the differences between this match and the group stage fixture with the Swedes?

- This match was more important. We're happy that we have won bronze!

- This was my first World Championship. We have the best team, I have lots of happy emotions!

- Speak about your goal.

- Alyona Starovoytova fed me a pass, I had a chance and decided to shoot. It's really nice that the coaches trust me, I am the youngest in this team. I tried to prove my worth, improving in every game.