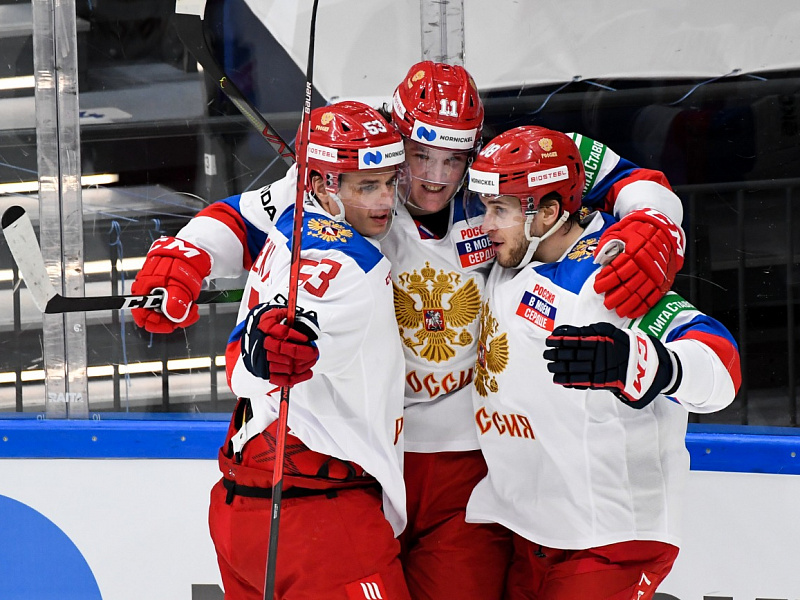 In Moscow, the senior Russian national team produced a clinical performance against Finland in the concluding match of the Channel One Cup, earning a 5:1 victory to consequently win the second stage of the 2020/2021 Euro Hockey Tour with a perfect record.

The two teams made an energetic start inside the Legends Park. Protecting the majority of possession, the Russians were probing for shooting lanes in the Finnish zone, while the visitors were proving to be very dangerous on the counter. Nevertheless, Russia’s pressure did result in an opening goal in the 14th minute, as Vadim Shipachyov lashed Yegor Yakovlev’s pinpoint pass beyond Jussi Olkinuora from the right of the crease with Finland on a delayed penalty.

The Finns responded well to that setback. During the closing stages of the frame, the away team pressed with intent in the Russian zone, with Alexander Samonov pulling off several important saves. HC Sochi forward Jere Karjalainen was particularly threatening with his tenacious play around Samonov’s net.

The manner of the game continued in the second period. However, as Finland committed more bodies to attack, space appeared at the back and Dmitry Voronkov doubled Russia’s money on the counter as he successfully connected with Maxim Mamin’s accurate feed.

Moments later, the away team did bundle the puck under Samonov at point-blank range, but it was disallowed for goaltender interference after Russian head coach Valeri Bragin had challenged the marker.

Russia subsequently improved in attack and promptly made it three with 29 minutes on the clock. Playing with real confidence, 20-year-old forward Voronkov was the Russian hero for the second time in the stanza, as he cut sharply to the slot and wristed the puck past the forlorn Olkinuora at the second attempt.

Everything seemed to be going Russia’s way, but with the period approaching its climax, Harri Pesonen gleefully pounced on a poor defensive error to get Finland on the board when clean through.

Finland predictably laid siege to the Russian goal throughout the third period. Requiring goals, the visitors tested Samonov from all angles possible, with our players having to soak up heavy pressure. The Russians stood firm to the challenge, however, and Pavel Karnaukhov effectively iced it in the penultimate minute shorthanded as he hit the empty net after Olkinuora had been pulled for the extra skater.

In the dying seconds, Andrei Kuzmenko then added a fifth for good measure as he deceived Olkinuora when completing a flowing play on the crease, in turn securing a memorable 5:1 triumph!