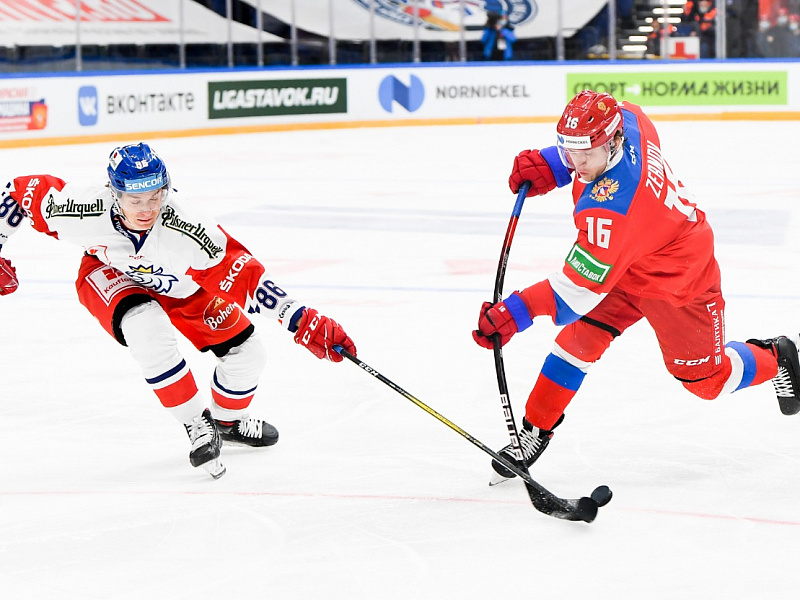 In a gritty battle, Russia produced a resolute defensive performance to defeat the Czech Republic in Moscow, earning a 4:1 victory to make it two wins in two matches at the 2020 Channel One Cup.

The Czechs made the faster start at the Legends Park. Nevertheless, after failing to take advantage of any of their several promising opportunities during the opening stages, they were promptly punished by the Russians who scored twice within the space of three minutes.

In space at the high slot, Anton Burdasov beat the unsighted Roman Will with a low wrister, before Andrei Kuzmenko scored with an almost identical attempt to double Russia’s money. Igor Ozhiganov came close to a third moments later on the powerplay as his effort struck the left post with the goalkeeper beaten.

The Czech Republic, however, responded well and halved the deficit in the 16th minute with Traktor Chelyabinsk forward Lukas Sedlak firing a rising wrist shot over Alexander Samonov’s blocker.

Feeling more confident, the opponents subsequently went on to dominate the second frame, outshooting Russia 13-5 as they protected the puck in the attacking zone for long periods. As our players struggled to cope with the Czechs’ pace, Samonov had to be at his best for the Russians, with the SKA Saint Petersburg goaltender conjuring up a series of alert stops to protect the slender one-goal advantage.

At the other end, Dmitry Voronkov and Ivan Morozov did have a pair of chances on the slot, however they couldn’t hit the jackpot with only the goalkeeper to beat.

With the match finely balanced, the next goal was always going to prove crucial, and Russia tallied it with a mere 50 seconds on the clock in the third period.

Skating unchallenged to the doorstep, Maxim Maxim connected with a low pass across the crease, gently knocking the puck under Will to bring the arena to its feet.

Throughout the majority of the stanza, Russia had to rely on Samonov to keep the lead intact, with our goalkeeper successfully standing tall to the challenge and the pipe coming to his rescue on one occasion. In the 56th minute, Czech forward Dominik Lakatos handed our team a chance to make it 4:1 after he gave up a penalty shot for holding, but Denis Zernov couldn’t convert the opportunity.

However, the hosts weren’t to be denied their fourth goal, as Mamin expertly hit the empty net two minutes later after Will had been swapped for the extra skater.

Russia will now prepare to face Finland tomorrow in the third and concluding game of the competition. The match is scheduled to begin at 15:30 local time.