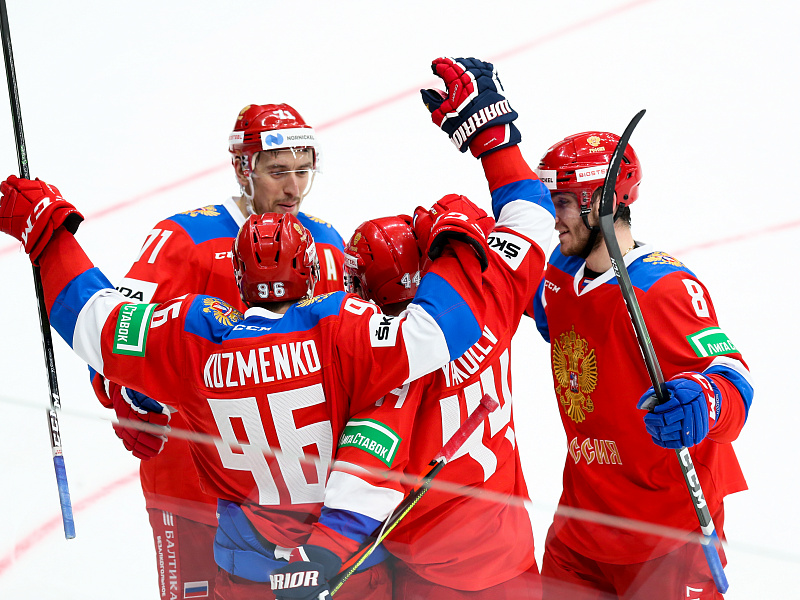 In a pulsating encounter, Russia outlasted Sweden at the Channel One Cup, claiming a thrilling 4:3 victory in a lengthy penalty shootout in Moscow.

Russia came out with real energy inside the Legends Park. Throughout the first period, our players held the initiative and created a handful of golden opportunities, with Alexei Marchenko and Nikita Lyamkin both smacking the pipe. Nevertheless, SKA Saint Petersburg goalkeeper Magnus Hellberg was standing firm in the Swedish net despite the Russian pressing, notably pulling off a stunning glove save to deny Andrei Chibisov. Sweden rarely tested Alexander Samonov with the visitors largely relying on counter-attack opportunities.

In the early stages of the first period, Hellberg did have to be briefly replaced by Anders Lindback as a consequence of problems with his equipment, but the 29-year-old soon took his place in goal again.

The manner of the match dramatically changed in the second stanza.

All of a sudden, Sweden began playing on the front foot, and their intense pressing quickly resulted in an opening goal in the 25th minute. Lurking on the doorstep, Traktor Chelyabinsk forward Pontus Aberg made a deft tip on the puck, deceiving Samonov in the process to give the Swedes their craved breakthrough.

The away team went on to dominate the period. Protecting the puck in our zone for long periods, Sweden created wonderful chances at will with flowing play, however Samonov came to the rescue for Russia with alert saves to keep the difference at one.

With the second period approaching its conclusion, Andrei Kuzmenko grabbed an equaliser against the run of play for Russia, reacting quickest to tap the loose puck over the line.

The match really did burst into life in the third period.

Seven minutes into the frame, Emil Pettersson sent a rasping wrister under Samonov’s glove, but Russia promptly conjured up a perfect response. On the counter, Nikita Soshnikov went top shelf on Hellberg when alone on the right faceoff circle, before Vadim Shipachyov gave Russia their maiden lead of the day on a powerplay after Sweden had been punished for an unsuccessful coach’s challenge against our second goal.

Sweden refused to lie down, though, and they took the match into overtime as Emil Larsson’s effort just had enough power to creep through Samonov with less than five minutes remaining on the clock.

Few chances were witnessed in the ensuing extra frame with the teams not willing to take any risks.

In the penalty shootout, eight rounds were required after Soshnikov and Larsson had exchanged goals, and it was Kuzmenko who won the match for Russia as he emphatically lifted his shot over Hellberg.

Russia will now prepare to face the Czech Republic on Saturday in the second game of the competition. The start time is scheduled for 15:30 local time.