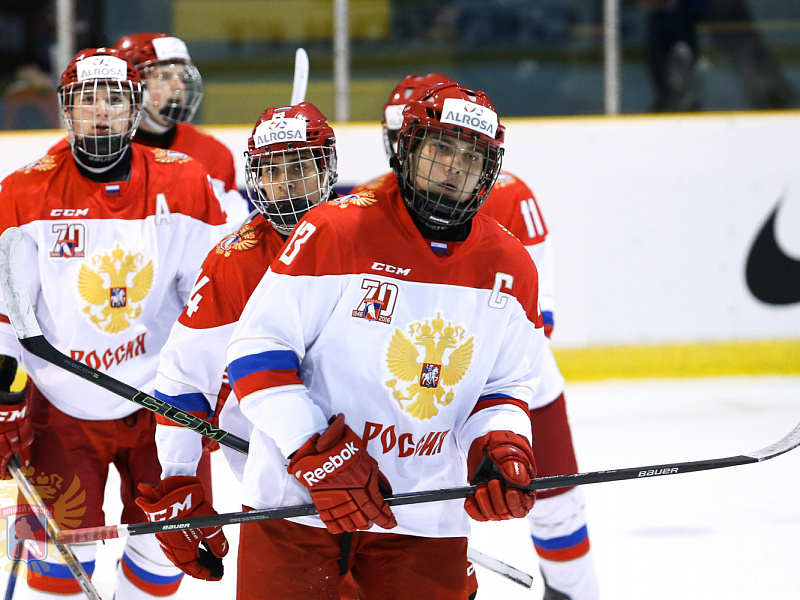 For their first match of the under 17 World Challenge Cup, the Russian national team took on Sweden in Sault Ste. Marie, Canada.

With both of these teams being mentioned among the tournament favourites, this was always going to be a tight affair. Goals from Pavel Gogolev, Alexander Khovanov and Grigory Denisenko gave Russia three separate leads during the sixty minutes, however Sweden came back every time, netting a late third marker to take it into the extra frame.

Nevertheless, Russia would get their win. Alexander Khovanov scored his second goal of the game midway through overtime, ensuring Russia get their campaign off to a winning start!

- It was a tough and interesting match. Two equal opponents played each other, we got more lucky in overtime. Alexander Khovanov did a good job, his goals were down to his individual quality.

- The first line was changed up for this game.

- Before the match, we spoke about the warm-up rules of not crossing the red line. Unfortunately, Grigory Denisenko ended up doing just that, and he was given a ten minute penalty. That was why we changed the lines around.

We made individual mistakes today. Sweden skate well, and we conceded two goals when they were set up in our zone. We have been working over this aspect in training. Finland are our next opponents, we know them well. We have video material to analyse.

- It was a really hard game. The main thing is that we fought for each other until the end. We're happy to win. My first goal came about after a dump into the zone, I was given a nice pass on the slot.

In overtime, Sweden took a penalty and I decided to take on the shot myself. I think that we have enough time to recover before tomorrow's game, games with Finland are always tense.