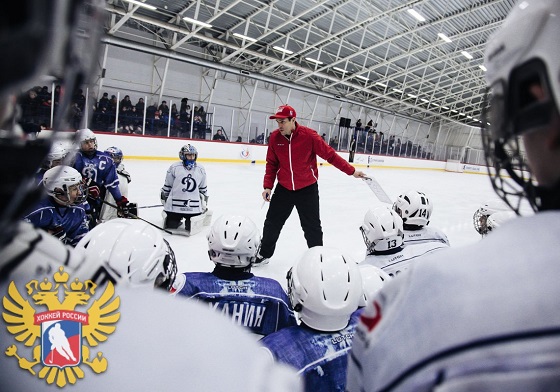 Russian national team forward Pavel Datsyuk has held a master-class for Dynamo Saint Petersburg players born in 2003, 2004 and 2005. The event was organised by the Russian Ice Hockey Federation.

During the hour long work-out, the players worked over puck possession and skating techniques. After the training session was completed, Pavel gave the participants special gifts from the RIHF and all of them could get an autograph.

- You need nerves of steel to work with children. I have a lot of respect for youth coaches. Every child is talented in their own way, however when training, they sometimes have to do things which they don't particularly like. When the session draws to a close, they don't know whether they love or hate you. When you see children who burn to desire for ice hockey, you remember being young yourself.

- Do you not think that in the past, children were more willing to train even when it's freezing outside?

- I think that we will have such children. If a child really wants to play ice hockey, he will go and pick up a stick with his friends even when it's really cold. Nevertheless, it's great that now we have better facilities and sports centres. I hope that such events will take place not just in the big cities, but in smaller ones too. There are a lot of talented children who do not have the opportunity to play ice hockey. They need help.

- A young Russian national team played really well at the Karjala Cup. Do you think that a similar squad should compete at the Channel One Cup in December?

- I'm all for it. The guys proved they they can play well. However, as players, we shouldn't interfere with the coaches' decisions. It's always nice playing at the Channel One Cup, there's a good atmosphere there.