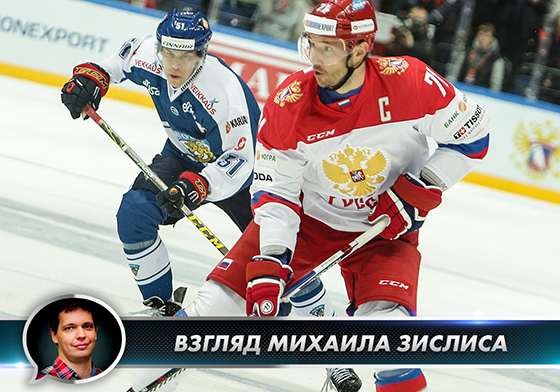 Yesterday, the preliminary Russian national team roster for the Channel One Cup was announced. The headline news was that Ilya Kovalchuk will make his return to the national setup.

Russians will always have a criticial opinion concerning any issue in politics or sport. When we talk about Russia's football or ice hockey teams, there will also be people who you can't please.

In the coming days, head coach Oleg Znarok will share his reasoning behind the roster decision with the media. However, it must already be noted, that this squad has not left fans with any complaints. All supporters have around two or three of their favourite players present in the team. The coach has the right to call up who he wants. Ivan Telegin's selection is a perfect example. The CSKA Moscow forward is not performing as well as he did at the World Championship and the World Cup, but it's still not certain that he will be included in the final Channel One Cup roster.

It's difficult to find fault with Oleg Znarok's overall roster choices. Firstly, the Moscow public have already purchased all tournament tickets and deserve the right to see the top players perform. Also, Sergei Mozyakin, Pavel Datsyuk and most importantly Ilya Kovalchuk have not been picked because of marketing reasons. Even if you haven't seen them play, you only have to look at the KHL scoring charts to understand why they are in the team. Concerning the future, there have been issues surronding the point of calling up these players. However, it's worth taking into account the overall balance of power in ice hockey. The NHL's participation in the 2018 Olympic Games in South Korea is still an unclear matter, and that means that we should be prepared for any possible situation. It's highly unlikely that Mozyakin and co. will regress so much that Oleg Znarok won't want to consider them for Olympic selection.

Ilya Kovalchuk's return to the national team after a year out is a wonderful story. During the spring, he was excluded from the SKA team in the KHL playoffs and then missed out on the World Championship. Back then, it was hard to imagine that the forward would find common ground with the head coach. Nevertheless, their work in SKA has added fuel to the argument that Znarok was right to share posts between SKA and the national side. Kovalchuk is playing at his best again, taking points in all of the last ten games. Only in eight of 38 KHL matches this season has Ilya left the ice without a point to show for his efforts. In a year's time, it's not a fantasy to think that Ilya will put on the Russian jersey at the Olympics. At this moment in time, he and the team need to focus on making up for last year's poor Channel One Cup performance, where Russia came fourth.

The coaches have also picked younger players who impressed at the Karjala Cup. Vladimir Tkachyov, Andrei Svetlakov, Alexander Barabanov and Rushan Rafikov are among them. When playing in one team with those players, Viktor Antipin and Yegor Yakovlev look like veterans. Looking at players who have starred in the first half of the KHL season, only Salavat Yulaev defenseman Zakhar Arzamastsev is missing. From my side, I can guarantee that my first question to the head coach at the Novogorsk media day will be about the absence of this particular player. Nevertheless, it's pleasing that almost two metre tall Admiral goaltender Igor Bobkov has been given a chance. Out of all goalkeepers who have played twenty or more matches, he has the highest saves percentage (94.7), beating the likes of Alexander Yeryomenko, Igor Shestyorkin and Vasily Koshechkin. Considering the individual level of Admiral's defensemen and the large amount of flying, the 25 year old netminder's call up is logical. Bobkov was named the best goalkeeper of the 2009 under 18 World Championship and the top player of the 2011 World Junior Championship final in Buffalo. He has talent, and it isn't something terrible if a player can't realise his full potential when 20 years old.