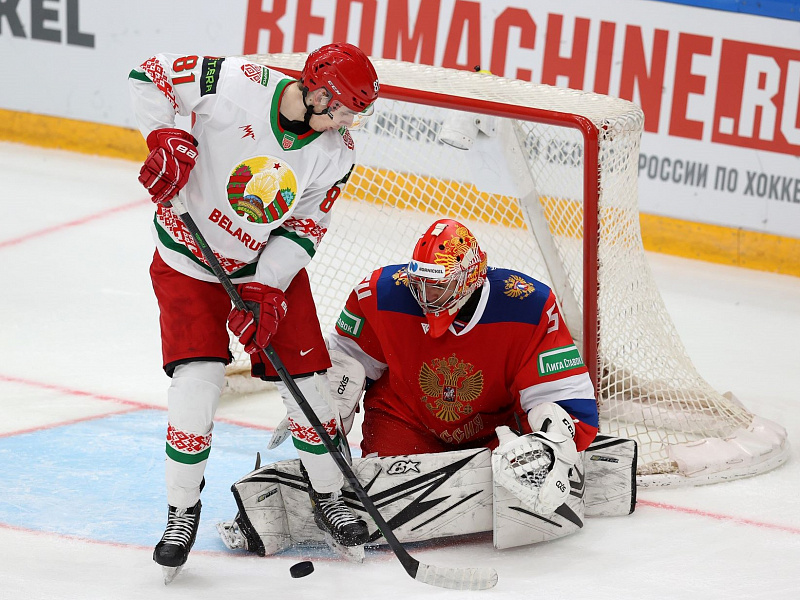 In a thrilling encounter, Russia came up short against Belarus in the concluding match of the 2022 Channel One Cup in Moscow, conceding a slender 4:5 defeat after a dramatic penalty shootout.

The two teams immediately set an intense tempo at the CSKA Arena. Predictably, Belarusian representative Alexei Kolosov was the busier goalkeeper during the opening stages, but the visitors managed to take the lead midway through the maiden period against the run of play.

The same player then played a vital role for the Russian equaliser. After the 23-year-old Sibir Novosibirsk forward had committed a slashing foul, Maxim Mamin slid his low effort between Kolosov’s pads with Alexander Kadeikin blocking the netminder’s view.

Russia firmly took the initiative in the second stanza. Piling the pressure on Belarus, our players created plenty of clear opportunities, with Kolosov regularly being called into action.

The go-ahead goal eventually arrived in the 32nd minute. Simply too strong for his opponents, Ilya Safonov powered to the doorstep and carefully aimed his backhander between the pads.

However, subsequent poor discipline gifted the Belarusians two powerplay goals before the frame had ended. On the right faceoff circle, Shane Prince fired his wrist shot under Serebryakov’s blocker, before Roman Gorbunov whipped his attempt into the left corner in the penultimate minute of the period after he had managed to control the bouncing puck.

It was certainly no surprise to see Russia increase the intensity of their play in the third period.

The early pressure resulted in an equalising goal in the 48th minute. Lurking unmarked to the left of the crease, Alexander Kadeikin collected the loose puck and had no trouble in sending it into the far corner with Kolosov already down and out.

The Belarusians were firmly on the back foot. Their troubles looked to be growing when defenseman Dmitry Deryabin took holding penalty but, to everyone’s surprise, they netted shorthanded to take their third lead of proceedings.

When speeding clean through after pouncing on a sloppy defensive error, Vladislav Kodola made no mistake.

Russia were on the ropes. Our team recovered quickly, though, forcing overtime with a little under four minutes remaining as Kadeikin bundled the puck in from point-blank range.

In the ensuing extra frame, the Russian hosts were presented with an ideal chance to end the match in their favour when Gorbunov hooked, but Kolosov stood tall to the challenge as he pulled off a couple of tricky saves.

Kolosov was about to become the hero for Belarus in the penalty shootout. Refusing to be beaten - and with Prince scoring for Belarus - the hugely impressive 20-year-old goalkeeper saw the away side through to a famous victory. Interestingly, the Russian coaching staff had opted to swap Serebryakov for Maxim Dorozhko for the shootout.

As a consequence of this win, Belarus have indeed finished in first position of the tournament standings.