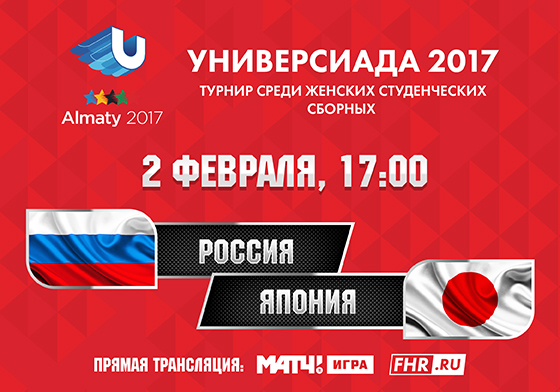 On the 2nd of February, the Russian student women's national team will play their third 2017 Winter Universiade group stage match against Japan.

With Russia having breezed past the USA 7:1 in the first game, confidence should be high among the ranks. However, today's game promises to be a much tougher task. Despite their low status, Japan put on a spirited performance in their opening match of the tournament, losing to their American opponents 2:3 in a tight battle. Indeed, back in 2015, Japan ended up taking a bronze medal at the Universiade.

Remember that Russia are the reigning Universiade champions, after winning the 2015 final 3:0 against Canada. Head coach Alexei Chistyakov will be after another victory at this competition.

The Russia W - Japan W match will begin at 17:00 Moscow time. A live Match TV broadcast can be enjoyed here: