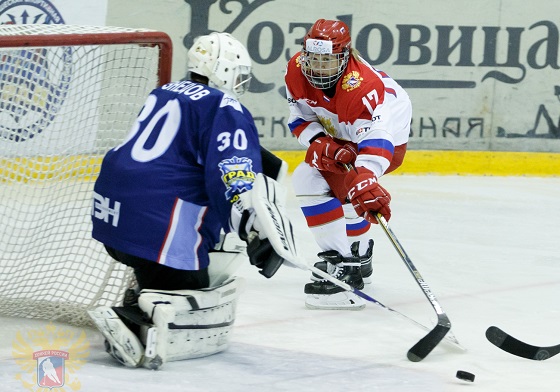 As a part of the World Championship preparations, the senior Russian women's national team played a friendly match against HC Grad.

Earlier on in the day, the team had paid a visit to the Ice Hockey Museum in Moscow. The girls were given a tour around the museum, before meeting with a women's team called Moskvichka made up of girls born between 2005 and 2008.

To finish off the event, Russian Ice Hockey Federation president Vladislav Tretiak wished the team luck at the World Championship in the USA.

On the 24th of March, the team will fly to the USA for the World Championship which will start a week later. Four days after arriving, Russia W will play a friendly match against Switzerland.

- We played against a quality team which showed us where we need to improve. I think that this match will be useful for us in the future. The level of men's ice hockey is a lot higher than in the women's game. The girls tried as hard as they can. We changed around the lines and and tried to give everyone a chance to play. Each player showed themselves in a different light, but at this moment in time, they are feeling the effects of the training camp. In the evening, we will analyse the match and draw up our conclusions. Tomorrow, we will hold a light training and we will soon fly to the USA. On the 28th of March, we will play against Switzerland in America.

- This match was another training session for us. It was difficult, the arena was warm and the rink was even smaller than the one we trained in Novogorsk. At times, we failed to keep up with our opponents and they were physically stronger than us. Nevertheless, it was a great lesson for us before the World Championship. The team is in good spirits for the competition, we focused on this game as if it was a competitive fixture. The result wasn't in our favour, but it's better to lose in training than in a proper match.