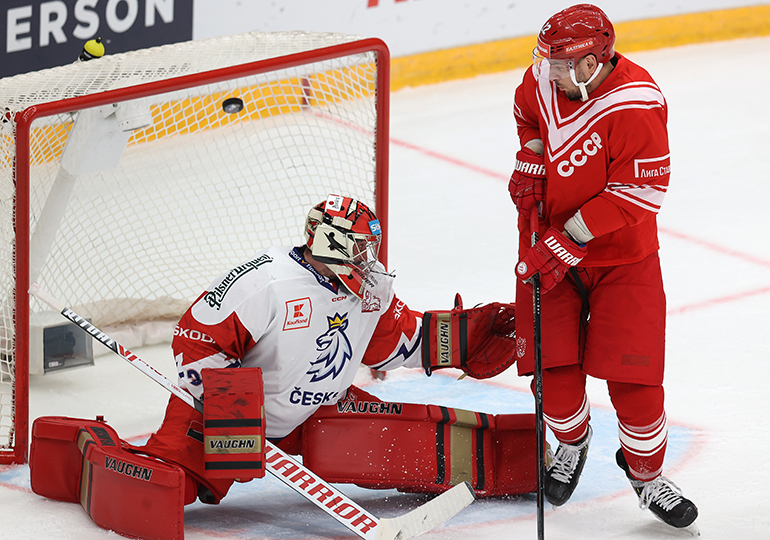 In the third match of the 2021 Channel One Cup, the senior Russian national team comfortably defeated the Czech Republic at the CSKA Arena in Moscow, emerging victorious by a score of 5:2.

The Russians took the lead with only 14 seconds having been played.

After Alexander Kadeikin had won a faceoff draw in the attacking zone, the puck dropped at the stick of 20-year-old forward Arseniy Gritsyuk, who unleashed an unstoppable wrister over Roman Will’s blocker.

Not long later, the Czechs were presented with a couple of golden opportunities to quickly equalise on the powerplay, as Timur Bilyalov brilliantly denied Milan Gulas at point-blank range and Michael Frolik wristed inches wide of the right corner.

A ruthless Russian team promptly punished the visitors for their profligacy.

Lurking on the slot, Daniil Vovchenko connected with Yegor Korshkov’s intelligent pass and whipped the puck beyond Will.

The Czech goaltender looked somewhat shaky in the opening frame. Firmly in the box seat, our players were in no mood to show any mercy to the opponents, and it became 3:0 in the 15th minute as Mikhail Grigorenko converted a 1-on-1 opportunity.

Nevertheless, the Czechs weren’t prepared to wave the white flag, and veteran forward Jan Kovar got them on the board in the penultimate minute of the frame from the crease.

Predictably, Czech head coach Filip Pesan made the call to swap the hapless Will for Simon Hrubec ahead of the second period.

To their credit, the away team did make an improvement defensively in comparison to the first frame, protecting Hrubec effectively and not presenting Russia with clear shooting lanes. However, our team gradually began to increase the intensity towards the end of the period, producing a spell of pressure which resulted in two goals in the space of two minutes.

On the right faceoff circle, the in-form Grigorenko thumped a powerful one-timer into the far corner, before Artyom Anisimov subsequently tipped Alexander Elesin’s ferocious slap shot past the goaltender on an ensuing powerplay.

Our coaching staff decided to pull Bilyalov in favour of Alexander Samonov for the third period.

Despite trailing by four goals, the Czechs came out with all guns blazing in the frame, pressing the home team and competing with plenty of intent.

Their positive start to the period was rewarded with a powerplay goal in the 48th minute. Unmarked on the left flank, Gulas was picked out with a pinpoint pass and gave Samonov no chance with a huge one-timer.

Samonov was a busy man throughout the third period with the Czech Republic throwing everything at our team. But, with our goaltender stopping eight of the nine shots he faced, Russia successfully saw out the closing stages to win without any unnecessary nerves.

Russia will now prepare to play against Finland tomorrow. Puck-drop is scheduled for 15:30 local time.