Alexei Zhamnov: "I believe that we can win the gold medal at the Olympic Games" 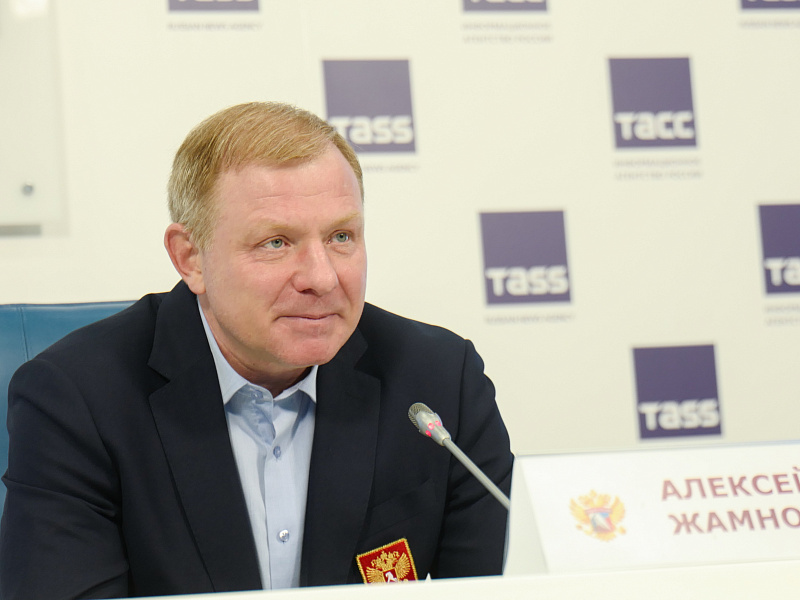 Federation
Alexei Zhamnov, the new head coach of the senior Russian national team, spoke about the preparations for the upcoming 2022 Olympic Games:

- Who will be included in the management group of the Russian national team at the 2022 Olympic Games?

- Assistants to the head coach will be Sergei Gonchar, Alexei Kudashov, Evgeny Nabokov and Sergei Fyodorov. Ilya Kovalchuk will be the general manager of the team. I am responsible for the decisions concerning the management group. Even if the NHL doesn't participate in the Olympics, our management group won't change. Oleg Bratash will coach the team at the first stage of the 2021/2022 Euro Hockey Tour, before my coaching staff takes charge for the second phase of the competition

- Why did you choose Kovalchuk?

- I had a long conversation with Ilya. He has extensive experience playing in the Russian national team, he knows all the guys in the KHL and in the NHL. He knows things about players which I don't, this is a big positive fro us. Kovalchuk will strengthen our coaching staff in preparation for the Olympics. He is ready to work, he's really interested in this role. Ilya won't sign with any team before the Olympics take place. Ilya won't be on the bench during the Games, only the coaches will be there.

- What will be the responsibilities of Oleg Znarok?

- He has a contract as a coach-consultant for the Russian national team. I met with him, we have a normal working relationship. Znarok won't be on the bench, but his experience will help us.

- How will responsibilities be distributed within the management group?

- When Gonchar arrives in Russia, we will all sit down together and make decisions concerning everyone's areas of responsibility. This will take place before the Channel One Cup takes place in December. Of course, we have a Plan B in mind in the event that the NHL doesn't participate in the Olympics, but we don't expect that to happen.

- You said that as a result of NHL players only arriving in China two days before the tournament begins, the issue of tactics isn't a priority.

- I myself participated in the Olympics as a player. Furthermore, I also worked in the management group at the 2018 Olympic Games in South Korea, when we had a month to prepare for the competition and put together tactical plays. This year, the situation is completely different. We will only have a maximum of two training sessions before the first Olympic game.

I have already spoken to many NHL players by telephone. At the end of October I am flying to North America to meet with our players in order to make sure that they will understand what we demand from them in China. Before the Olympics begin, we will send the players plenty of material and we'll be in regular contact. All of the players must know their respective responsibilities within the group. They have to focus on representing their country, instead of thinking about their own personal ambitions.

When I return from my trip to North America, Kovalchuk and Gonchar will remain there. They will fly and watch matches which involve national team candidates. At the same time, I do not exclude that some guys from the KHL will go to the Olympics. The door is also open for them, they'll have a chance to display their potential at the Channel One Cup.

- What are the chances of Russia defending the Olympic title?

- Defending the title is always harder than winning it the first time. It will be a tough tournament with all of the world's best players participating, there won't be any easy matches. We believe that we can compete for the gold medal with our team.

- What are the terms of your contract with the national team?

- Th current contract runs until the completion of the Olympic Games, but there is an extension clause. Everything will depend on the result.
#Жамнов Алексей Юрьевич
Last game
Liga Stavok St. Petersburg Cup
3 : 2
Russia Belarus
Russia, Saint-Petersburg, Jubileiny

Federation
We congratulate Alexander Steblin!
On the 16th of May, former Soviet ice hockey player and current member of the Russian Ice Hockey Federation Board, Alexander Steblin, celebrates his birthday.
Federation
Federation
The RIHF participated in an international conference in Minsk
Between the 5th and 7th of May, Minsk hosted the II International Scientic-Practical Conference concerning the topic of Current Issues of Coaching Young Ice Hockey Players.
Federation