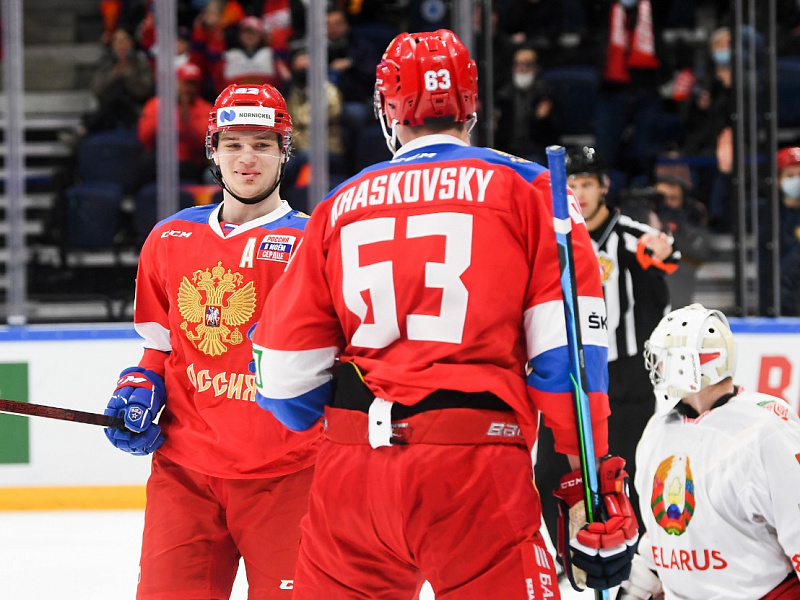 In the second of two 2020/2021 Euro Hockey Challenge duels between the nations, the Russian Olympic national team proved too strong for Belarus, earning a confident 2:0 victory at the VTB Arena in Moscow.

Russia came out with energy and intent during the opening shifts. Immediately taking the initiative, our players quickly began piling the pressure on Belarus, with opposing goalkeeper Konstantin Shostak having to make a series of tough saves to deny our players on the crease. Nikolai Kovalenko, Pavel Kukshtel and Vladislav Efremov all came particularly close, with the trio wasting excellent opportunities.

The Belarusians were posing a threat on the counter-attack, though, and Ivan Bocharov pulled off a stunning point-blank stop with his right pad following a goalmouth scramble. The puck almost rolled over the line after Bocharov's initial save, but defenseman Mikhail Naumenkov came to the rescue as he swept it to safety in a last-gasp clearance.

Not long later, Shane Prince smacked the crossbar for the away team with a rasping wrister.

The breakthrough was made by the Russians in the penultimate minute of the first period on the powerplay.

Alone on the left flank, Ivan Morozov connected with a wonderful pass from SKA Saint Petersburg teammate Vasily Podkolzin, carefully lifting the puck into the far corner from a tight angle.

The second stanza saw both teams create a number of promising chances.

Midway through the frame, Belarus seemed to be taking the initiative as they started to press Russia with intent near Bocharov’s net, but they contrived to concede their second goal when on the powerplay in the 31st minute.

Simply too strong for his markers, Pavel Kraskovsky battled his way to the crease, taking the puck around the stranded Shostak and expertly sliding it in.

The Belarusians spent the majority of the remainder of the second period searching for a response. Thankfully, Bocharov was on top form for the home team, making tricky saves with the likes of Prince and Artyom Demkov proving to be threatening for Belarus.

Belarus subsequently ran into penalty trouble in the ensuing third period. Nevertheless, Shostak’s heroics were keeping the away team in the match, with the solid 21-year-old goaltender conjuring up impressive saves to give his side a fighting chance.

One of his best moments saw Shostak shut the door on the clean-through Zakhar Bardakov.

In the closing minutes, Bocharov did have to make challenging stops with the Belarusians forcing the issue, in particular against Francis Pare with his right pad. However, despite Shostak being pulled for the extra skater, Belarus couldn’t hit the jackpot and Russia calmly saw the game out.

Russia will next be in action in the Euro Hockey Challenge on the road in Switzerland. The two games away from home are scheduled for April 30 and May 1.