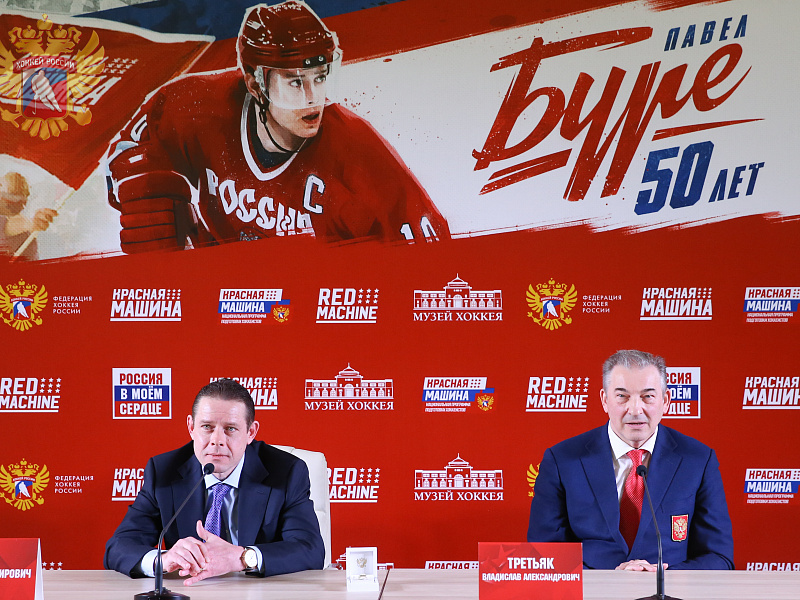 As a part of the conference, RIHF president Vladislav Tretiak congratulated Pavel by presenting him with a special Russian national team jersey and a commemorative ring dedicated to the third Youth Olympic Games in Switzerland. For his part, Pavel donated his jersey and a signed stick to the museum.

- We have the opportunity to meet in honour of Pavel Bure today, a legendary player who progressed through the CSKA Moscow system before winning international competitions with the national team. I remember how well Pavel played at the Olympics in Japan and America when I was coaching, especially when he scored five goals against Finland. Pavel spent 12 seasons in the NHL, scoring a minimum of 50 goals in several years. Furthermore, he would have set many more records if not for the injury. He is a man who has devoted his whole life to ice hockey, and now he helps the Russian Ice Hockey Federation a lot, notably leadjng master classes as part of the Red Machine National Development Program across the country. Pavel Bure is a true professional and we are proud of him. Last year, our junior national team won gold at the Youth Olympic Games, and today I would like to present Pavel on behalf of the RIHF with a commemorative ring.

- First of all, I want to thank my family. My mother took me to join the CSKA academy at the age of six. My wife, who has given me three children, is now doing the same with our son I thank my daughters and mother-in-law. I don’t like the word "veteran", so I would like to thank our legends, each of them helped me progress and develop. I used to read about them in the newspapers, as we didn’t have the internet back then! Many thanks to all of you. Our ice hockey family stretches across seven generations, and we’re continuing to communicate, learn from each other and complement each other. And thanks to everyone who took the time to come to the Ice Hockey Museum today!

- I have known Pavel for a long time, even when he was just starting to play for CSKA under the guidance of outstanding coach Viktor Tikhonov. Viktor had a dream to create a line as good as Igor Larionov’s line. He already had four players, but he needed a fifth who was highly skilled and intelligent enough on the ice. Subsequently, all of these five became outstanding players. What made Pavel different from all others was his sociability and the fact that he was respected among his colleagues. Later, when I happened to lead the Russian national team, Pavel never refused to be called up. I believe that if Pavel had not been injured in 1996, our team would have been more successful. I personally regret only one thing - that Pavel didn’t play for a long time in Russia. I want to wish him only success in his new field and for him to continue to defending the honour of our flag, just as he did on the ice.
#Буре Павел Владимирович
Last game
Sweden Hockey Games 2021
7 : 4
Russia Czech Republic
Sweden, Malmö, Malmö Arena