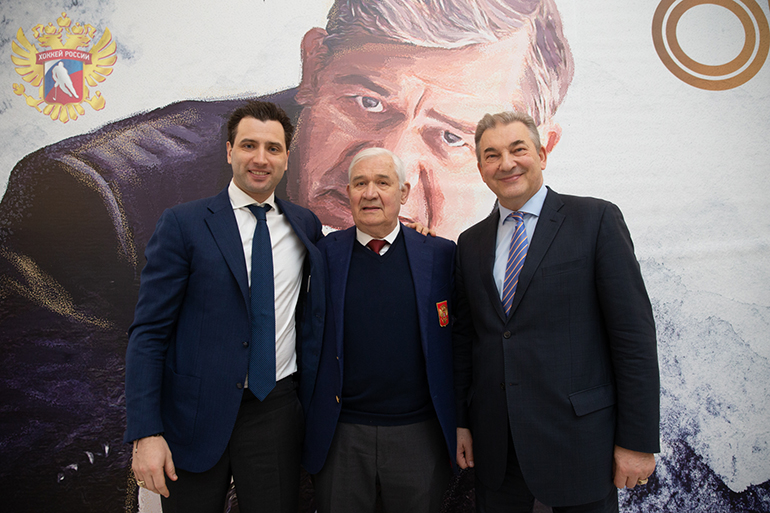 Main
Vladimir Yurzinov, a legendary coach of Soviet and Russian ice hockey, celebrated his 80th birthday at the Ice Hockey Museum in Moscow.

- Vladimir was a fantastic player and a superb coach. Personally, I think that he is still happy because he continues to work with the RIHF, sharing his vast experiences of the sport with both players and coaches alike. We should say thank you to him for producing some of the best players our country has seen. He loves ice hockey, and ice hockey loves him. A lot of our awards are down to his efforts. He's dedicated his life to ice hockey.

- Vladimir is a true professional who loves ice hockey. In addition, he always knew that the MHL - the Junior Hockey League in Russia - was a great and important idea concerning the development of our young players. As players, we always loved to play under his leadership, all of us respected him a lot. I was lucky to play at the Olympic Games and win a silver medal with Vladimir as coach.

- He is a legendary coach, who has made an overwhelming contribution to the development of ice hockey in Russia. I would like to sincerely wish him health, happiness and more success in the sport. I simply want him to always be happy. In my playing days, Vladimir was one of my coaches, and I have also worked with him as a coach myself. I can say that he has helped me greatly in life with his high demands.

- Vladimir is a great, unique person. As a player, he competed at a high level with the USSR national team, and he subsequently stood out as a talented coach. Nowadays, Vladimir is still dedicating his life to ice hockey, as he continues to hold master-classes. We are grateful for having him around!
#Юрзинов Владимир Владимирович #Наши Легенды
Last game
Турнир пяти наций
4 : 0
U17 USA
Russia, Ufa, Ufa-Arena