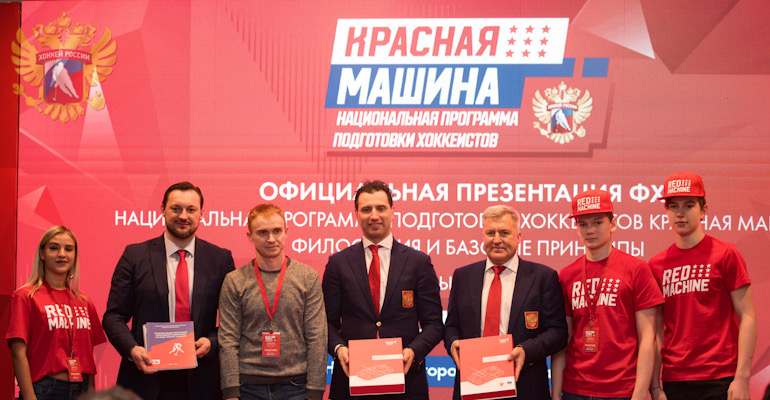 Theory material for children between the ages of six and 16 and specialities of goalkeeper training were presented. General manager of the national team and the first vice-president of the Russian Ice Hockey Federation Roman Rotenberg opened the ceremony with a speech:

- First of all, I would like to thank the governor of Nizhny Novgorod Region, Gleb Nikitin, for the chance to hold this Red Machine National Development Program presentation. This is one of the most ice hockey mad regions of Russia, and we're happy to see over 150 coaches at this event today. More than 3000 coaches have already downloaded the application, a good result considering that there are 7000 registered coaches in Russia. Our seminars and presentations are helping to bring coaches closer to the program. The Red Machine is constantly improving, we're now working on sections for women's ice hockey and sledge hockey. We've already held presentations in Moscow, Saint Petersburg, Kazan, Khabarovsk, Sochi, Norilsk, Khanty-Mansiysk, Tula, Kurgan and Sochi. We're also preparing seminars and presentations in Novosibirsk, Krasnoyarsk, Ufa, Novomoskovsk and cities of the Crimea. Everyone can study the Red Machine National Development Program!

Head of the department for introducing the Red Machine National Development Program Pavel Sherumov gave a speech concerning using the talent in the country.