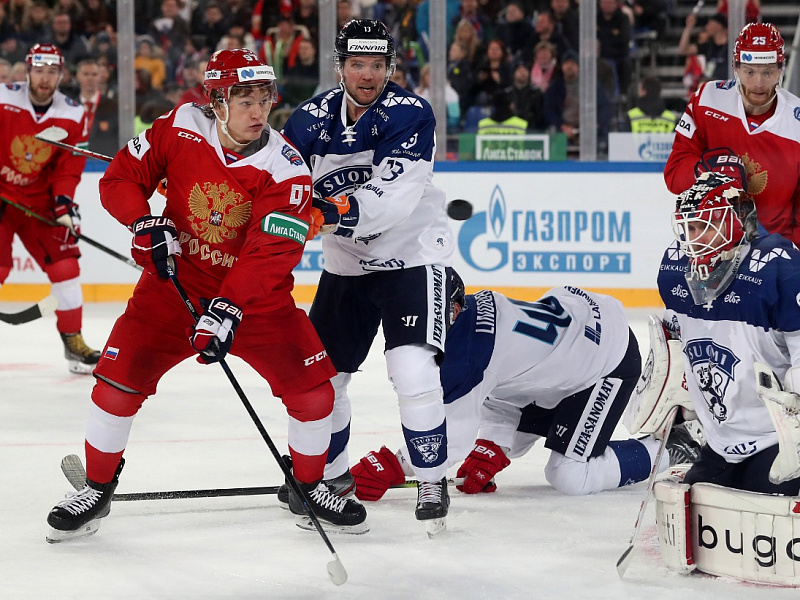 Main
The senior national team completed the 2019 Channel One Cup campaign on a high note, defeating Finland 2:0 at the Gazprom Arena in Saint Petersburg.

In truth, it was a tight, gritty battle between two evenly-matched teams, but a pair of clever Anton Slepyshev goals and flawless goalkeeping from Ilya Sorokin sealed an important victory in front of 67,877 supporters at the Gazprom Arena in the Russian Classic.

It didn’t take long for Russia to open the scoring. In the second minute of play, Finland were penalised for having too many men on the ice, and Slepyshev subsequently tipped Vadim Shipachyov’s effort beyond the helpless Frans Tuohimaa. Not long later, Nikita Soshnikov had an ideal chance to double the advantage, but he was denied by a wonderful sprawling save.

Following their initial slow start, the Finns slowly gained a foothold in the game, preventing Russia from applying pressure while creating a range of promising opportunities themselves. Mikko Niemila came close with a thumping slap shot which Sorokin fielded expertly.

Finland, despite trailing, continued to control proceedings in the second stanza. Protecting possession of the puck effectively, the visitors probed for openings in the attacking zone, testing Sorokin on a regular basis as they increased the intensity of their play. Towards the end of the period, Otto Paajanen should have equalised for Finland, but he contrived to smack the frame of the goal from point blank range.

The Russians, for their part, struggled to build up any sustained momentum, although Vladimir Tkachyov of SKA Saint Petersburg twice missed clear chances when alone on the crease.

The game continued in the same manner during the third period. In the opening moments, Jere Karjalainen escaped his marker between the faceoff circles, and his potentially goalbound wrister was heroically blocked by Alexei Marchenko. Sorokin was tested on numerous occasions as the away team pressed hard.
Finland were made to pay for their profligacy in front of goal.

With a little less than two minutes remaining on the clock, Slepyshev powered past the Finnish defence before beating Tuohimaa with a rising wrist shot. As expected, Finland did pull Tuohimaa for the extra skater in the dying moments, but Russia calmly held on to gain the second win of the Channel One Cup.

Final standings of the 2019 Channel One Cup: