Briefing ahead of the Karjala Cup 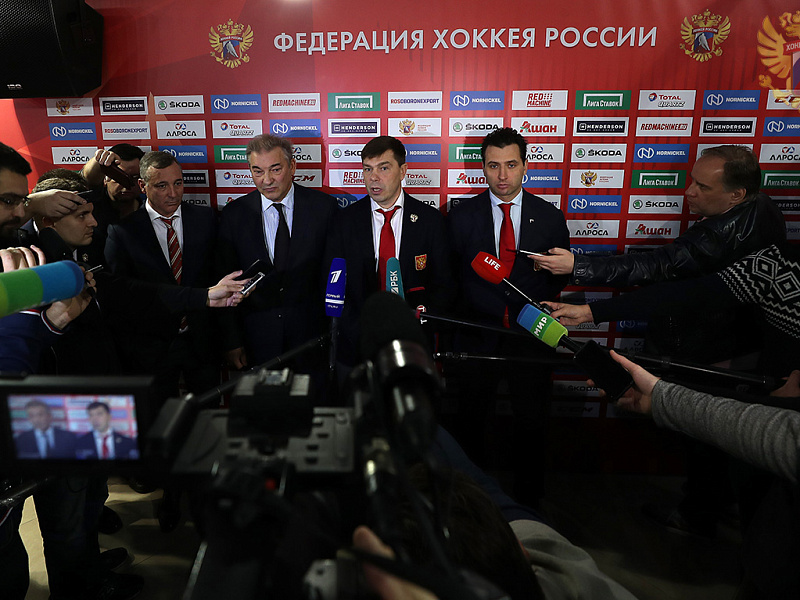 Main
Ahead of the 2019 Karjala Cup - the first stage of the Euro Hockey Tour - president of the Russian Ice Hockey Federation Vladislav Tretiak, first vice-president and team leader Roman Rotenberg and head coach Alexei Kudashov spoke to the media.

- Liga Stavok is helping us a lot, including the development of ice hockey. Those players who won awards will never forget it. At the moment, those players really ar the best in their respective categories. I congratulate everyone with the start of the season, the Karjala Cup is soon starting and it's an important tournament for us.

- Where can fans watch the games?

- We have an agreement with Match TV and Channel One for the broadcasts of Karjala Cup matches. Probably, the games on Saturday and Sunday will be shown on Match TV, while the match on Thursday will be broadcasted on a different channel of the company. All games will also be available to watch live on Channel One's website.

- Now isn't the best time to speak about political matters. We are playing sport. We proved everything by going to the Olympic Games in South Korea.

- There are lot of discussions about the rink size.

- The World Championship in Switzerland should be played on a 30x60 rink, while the Olympics are played on a 26x60 rink. Our national team should be prepared for any scenario.

- There's a possibility that the NHL won't participate at the Olympic Games again.

- Yes, there is an understanding that probably the NHL won't allow its players to compete at the Olympics. This is because it doesn't fit into their business model. We have to look at the players in Russia, and this team could play at the Olympics.

- The players in this team are leaders for their respective clubs. They are playing well while registering a lot of points. We always like to play attacking, aggressive ice hockey with puck control. When forming the squad, we took the players' ages, performances and mutual understanding into account. Anton Burdasov is the captain, while Rushan Rafikov, Artyom Zub, Anton Slepyshev and Alexander Kadeikin will be the assistant captains. The youth national team? Yes, they will be with us in Helsinki, we're always tracking the players' progress.

- It's nice to be the captain. However, at the same time, it's important to remember that I should help the team win regardless of whether I am the captain. How do I fee? I spent the pre-season training individually, but now I am used to training with a team again. The coaches will decide wh ere I will play.
#Национальная сборная
Last game
Sochi Hockey Open 2020
1 : 7
HC Sochi Olympic U20 team
Russia, Sochi, Shayba