A cooperation agreement was signed in Kondopoga 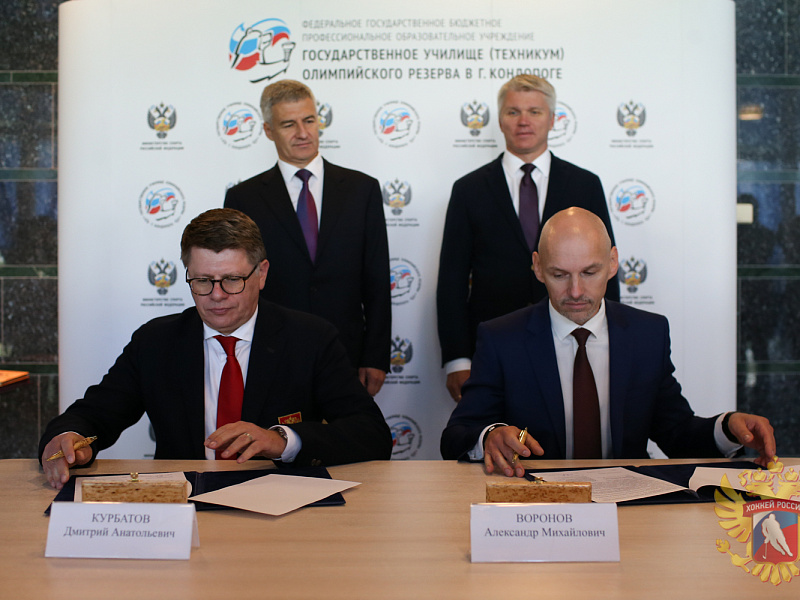 Main
An agreement concerning the training of young players was signed in Kondopoga in connection with the grand opening of the Federal State School of the Olympic Reserve.

The Russian Federation Minister of Sport Pavel Kolobkov, the head of the Republic of Karelia Artur Parfenchikov, the executive director of the Russian Ice Hockey Federation Dmitry Kurbatov and director of the Federal State School of the Olympic Reserve Alexander Voronov participated in the event.

"The RIHF is continuing to introduce the Red Machine National Development Program to ice hockey schools across the country," stated Dmitry Kurbatov. "Today, alongside the signing of our agreement, we also organised a presentation of the program for ice hockey coaches in the region."

The Federal State School of the Olympic Reserve was created in Kondopoga in accordance with Order no. 250 by the Government of the Russian Federation. The main goal of the project is to create a reserve of players and coaches in the field of physical culture and sport.

The Red Machine National Development Program, developed by the Russian Ice Hockey Federation, has been adopted by the Ministry of Sport. It allows all Russian ice hockey players to follow a singular program. More than 600 ice hockey academies and schools are expected to use the program.