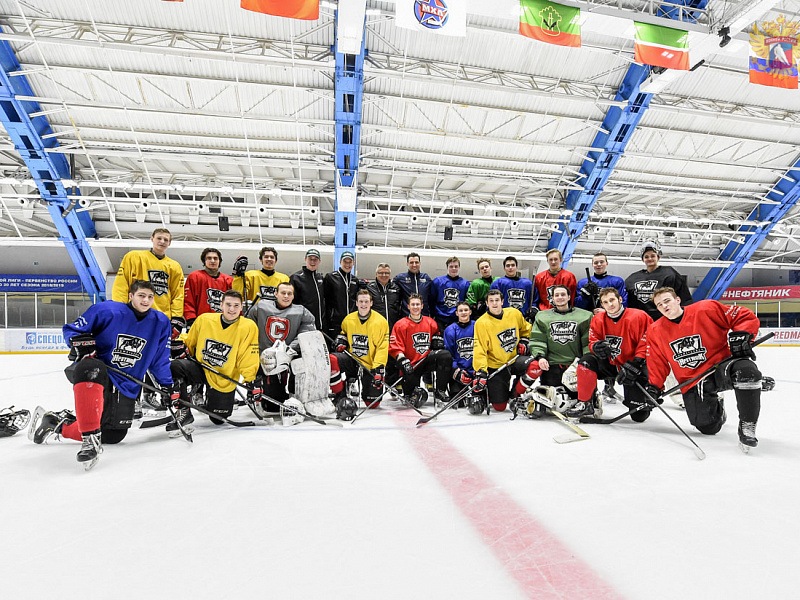 Main
Roman Rotenberg, head of the Russian national team management group and the first Russian Ice Hockey Federation vice-president, visited the new ice hockey development centre in Almetevsk which will open in March of this year. The presentation of the complex was held by director of the Ak Bars Ice Hockey Player Development Academy Igor Zakharkin.

The centre fits the most modern standards and allows for work to be undertaken concerning all playing aspects: skating, technical, physical and theory preparation both on, and off the ice. There are two ice rinks, 15 dressing rooms, a shot training centre, a gym, a hall for sport, a canteen and also a hotel for 45 people. Added attention has been paid to education. The complex includes school classes for 30 people. After looking around the centre, Roman Rotenberg and Igor Zakharkin participated in a training session for young players of the Neftyanik ice hockey school.

- It’s great to see that such modern ice hockey centers are being constructed in the regions. These training methods is the new way of developing players in Russia. Of course, we should have such centers across Russia, and the RIHF has already started implementing the program concerning their construction. It’s very important, that alongside sport, children can gain an education without letting ice hockey affect the quality of their learning. The more we have of these centers in the country, the more players will play and progress at home instead of entering the unknown abroad.

- Our modern complex allows us to train players according to all modern demands. It took a year to construct it. This wasn’t a coincidence that we constructed the centre here. Almetevsk is a city with strong ice hockey traditions, and the school works very well here. It’s very important that in this centre, highly qualified coaches will train players according to the basis of the Ak Bars academy and the Red Machine National Development Program. Alongside sport, we are paying special attention to education and developing personalities. If the player is struggling to keep up with his studies, he could be stopped from training. The player should get used to being in the atmosphere of respecting parents, coaches and his teammates.
#Захаркин Игорь Владимирович #Ротенберг Роман Борисович #NHDP Red Machine
Last game
Турнир пяти наций
4 : 0
U17 USA
Russia, Ufa, Ufa-Arena