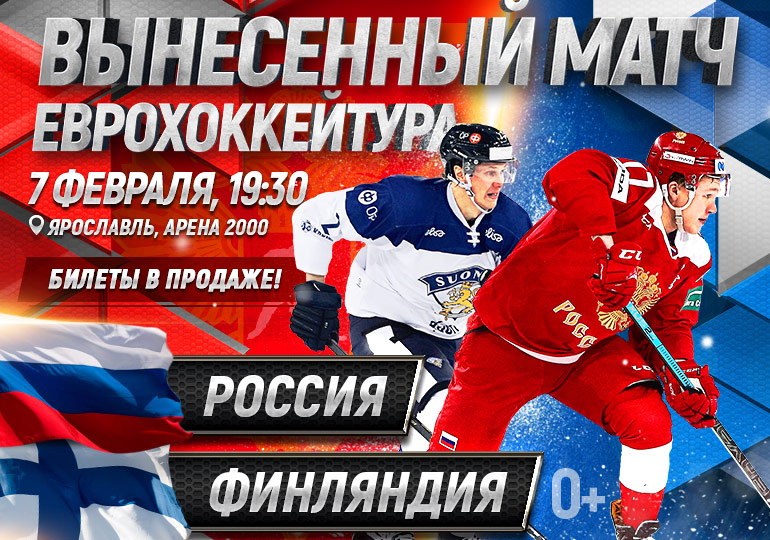 Main
On January 22, ticket sales started for the Euro Hockey Tour match between Russia and Finland which will take place at the Arena 2000 in Yaroslavl.

At the moment, Russia lead the 2018/2019 Euro Hockey Tour table with five victories and one defeat, and in two matches against Finland, our players have claimed two wins without conceding a single goal (3:0 in Helsinki, 5:0 in Saint Petersburg).

This game is a part of the Swedish Hockey Games competition which has been running since 1991. Following this game, the Russians will travel to Sweden, where they will play the hosts and the Czech Republic. Tickets can be purchased on kassir.ru, fhrtickets.com or at official kassir.ru ticket offices. There is a service charge of 10%.

The tickets will be sold in three stages starting on January 22, January 25 and January 30. One order can purchase up to six tickets. If you wish to purchase a VIP lounge, please send an email to ticket@fhr.ru.

Tickets at the stated price can be purchased at the Gorka club in Yaroslavl (1 Pervomayskiy Bulvar) between 10:00 and 22:00 daily by cash only.

In Yaroslavl, tickets can also be purchased at the following locations:

Children under the age of six can attend for free with their parents (without a seperate allocated seat).

Please contact ticket@fhr.ru if there are any problems with purchashing tickets.

The Russian Ice Hockey Federation highly recommends not purchashing tickets from individual people at different prices. The RIHF does not hold responsibility for tickets which are sold not from official partners of the organisation.

All disabled fans wishing to attend must send an email to ticket@fhr.ru before February 1, 2019. The number of places is limited.