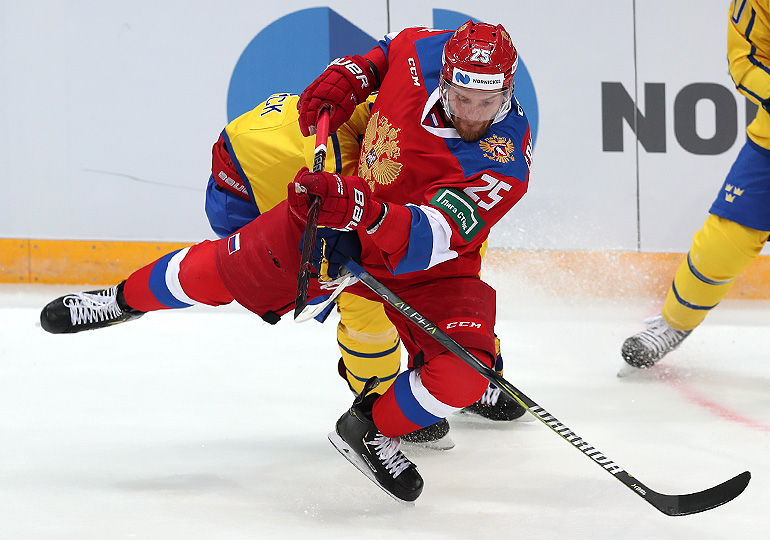 In Moscow, the first match of the 2018 Channel One Cup took place inside the Legends Park, with the senior Russian national team taking on Sweden. Head coach Ilya Vorobyov decided to put Nikita Nesterov, Artyom Blazhievskiy, Mikhail Grigorenko, Maxim Shalunov and Kirill Kaprizov in the first line together, while Ilya Sorokin was the starting goalkeeper. Lars Johansson of CSKA Moscow guarded the Swedish net.

Initially, our players made a fast start in the Russian capital, but Sweden were the ones to take the lead. Skating on the counterattack, Philip Holm threw the puck to the far right post where Tom Nilsson was waiting, and Alexei Vasilevskiy inadvertently tipped it past Ilya Sorokin. In response, Russia began to pile the pressure on the visitors, however Nikita Nesterov and Alexander Barabanov were both denied by superb saves by Lars Johansson at point blank range. The Swedish goalkeeper made 10 stops in the opening period.

Sweden improved in the second stanza and promptly assumed control of proceedings. In their defensive zone, the Swedes protected Lars Johansson to good effect, and they started to create more opportunities in attack. Unfortunately, their confident play resulted in a second goal. Standing at the point, defenseman Klas Dahlbek took aim, and his attempt was inadvertently deflected beyond Ilya Sorokin by a Russian stick. Russia barely had any clear chances, but with the period approaching its climax, Nikita Gusev missed the target with the goal practically at his mercy.

Things weren’t going Russia’s way at all, but in the third period, the team launched a dramatic comeback. On the powerplay, Mikhail Grigorenko halved the deficit, before Vladislav Gavrikov promptly went top shelf a minute later to even it up at 2:2. In the driver’s seat, Russia subsequently applied overwhelming pressure on the Swedish goal throughout the remainder of the period, however reliable goalkeeping fr om Lars Johansson took the game to overtime.

In yet another swing of momentum, Sweden had two powerplays in the extra frame. Nevertheless, Ilya Sorokin came to the rescue for Russia, standing tall to the Swedish pressing and practically single handedly forcing a penalty shootout.

That was wh ere Russia eventually won the match. Mikhail Grigorenko’s goal was backed up by five saves from Ilya Sorokin, sealing a pulsating 3:2 win! Russia will next take to the ice on Saturday against the Czech Republic at the Legends Park. Puck drop is scheduled for 15:45 local time.