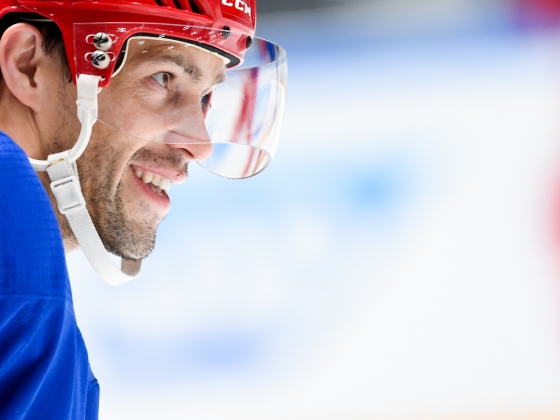 - It's too early to talk about how I will feel playing at my fifth Olympic Games, so far we are only training. Things will change when we move into the Olympic Village.

- Can you remember when you watched the Olympic Games in your childhood?

- Yes, all of the family gathered around the television and supported the team. I remember that my father cheered a lot.

- Over the years, how has the attitude to the Olympics changed?

- I understand how difficult it is to win an Olympic medal and that you have to make sacrifices.

- Are these Games special?

- There have been scandals. This tournament will be remembered because of them. However, I hope the competition will be special because of a different reason.

- Which word would you associate with this Russian team?

- What would you like to say to Russia's fans?

- Everyone has to believe in all Russians competing at the Olympic Games. We only achieve a great result if we are all together.

- I don't think that it will be more difficult without our flag, but it will be a bit strange. Our flag and country are in our hearts. We will try to not let people down.

- Our goal is to win. I am sure that everyone will do 100% possible to win this tournament.

- We will sing it among ourselves.

- A number of players haven't been allowed to participate.

- I think that they are disappointed and confused by the decision. They didn't do anything to not be allowed to play at the Olympic Games.

- We're preparing for the matches. The main thing is to improve physically.

- I felt great when being told that I had made the Olympic roster. There is a great atmosphere within the team, everyone knows each other. Have I seen so many journalists before? Yes.

- There are two weeks left before the tournament begins.

- We're not thinking about matches yet, our focus is on training well.

- You are one of the team's youngest players.

- It doesn't matter how old you are, it's always great to play for the national team, especially at the Olympic Games.