It's great to win the tournament before the Olympic Games 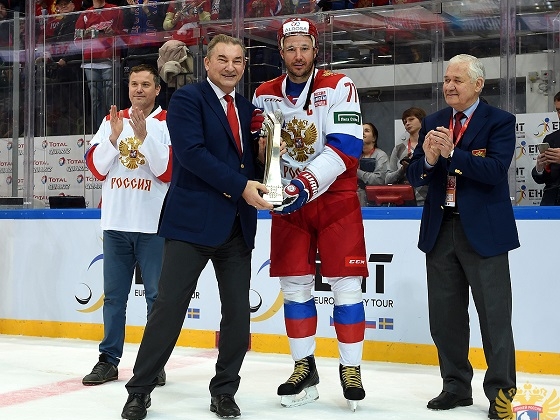 The final month of 2017 was a successful one for Russian national ice hockey teams. Almost all of our teams participated in different tournaments, with the majority of them acheiving good results and receviving international experience.

In December, Moscow's citizens have a wide range of entertainment events to choose from. However, the Euro Hockey Tour showed that ice hockey can compete against all of these different events. It was nice to see full stands at not only Russia's games. Moscow loves ice hockey! Without Russia's participation, there was an average attendance of six thousand fans. The Canada versus Czech Republic match broke the attendance record for a game where Russia aren't playing.

Our team displayed quality and beautiful ice hockey, things which are always expected from Russia. It's great that we managed to win at the 50th Moscow tournament, but it's also important that the coaches managed to look at the players before the upcoming Olympic Games.

The Russian Olympic team competed at the MECA Hockey Games, winning three matches to take first place. I like the attitude which players are showing when playing for this team, all of them are prepared to fight and show what they're capable of.

Russia U18 failed to take first place at the World Challenge Cup in Canada, but the experience will be really important for these players. There are three whole months before the World U18 Championship starts. The players need to draw the right conclusions and continue working, in order to make the final roster for the tournament which will take place in Chelyabinsk and Magnitogorsk.

The senior Russian women's national team won three out of four matches in Finland. Nine points allowed our players to take first place, and in late December, they will fly to Japan for two exhibition matches.

At the moment, the under 20 Russian national team are in Rochester, America preparing for the 2018 World Junior Championship, a tournament which will begin on December 26 under the guidance of head coach Valery Bragin. The competition has long been a favourite for Russian ice hockey fans.

In early January, the Russian junior women's national team will play at the Women's U18 World Championship in Dmitrov. We wish our team luck! I am sure, that we will see brilliant ice hockey over the New Year period!