National teams can be satisfied with their November performances 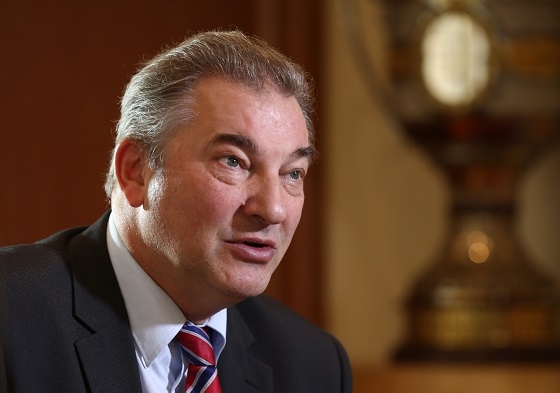 Direct speech
1. The senior men's national team played at the Karjala Cup, where they finished second out of sixth. Before the Channel One Cup, the coaches received a lot of important information. Not everything went to play during a 2:3 defeat to Finland, but the team then beat Switzerland 6:2 and the Czech Republic 5:2. At the Moscow Euro Hockey Tour stage, Russia will once again compete against Finland, while also taking to the ice against Canada and Sweden. In this tournament, not all of our best players participated. In particular, the coaches allowed Pavel Datsyuk to rest after an operation, while Ilya Kovalchuk was given the opportunity to recover following small injuries.

2. The Russian Olympic team (the Russian B side) confidently won the Germany Cup, becoming the first Russian team to win the Germany Cup since 1992. Russia hadn't played in the competition after 2003. The team beat Germany 8:2, America 5:2 and Slovakia 4:2. It's worth pointing out the victory against the USA, became the Americans had a team close to the one which will compete at the Olympic Games. Our players recovered from a 0:2 deficit, playing at a high tempo and scoring on the powerplay. In both of these Russian national teams (senior and Olympic), 13 different KHL clubs were represented, which is more than half of the Russian teams in the league. At the Karjala Cup in Finland, players of SKA Saint Petersburg, CSKA Moscow, Metallurg Magnitogorsk, Ak Bars Kazan, Lokomotiv Yaroslavl, Avtomobilist Yekaterinburg and Salavat Yulaev Ufa competed. Alongside those clubs, Vityaz Podolsk, Spartak Moscow, Severstal Cherepovets, Avangard Omsk, Sibir Novosibirsk and Dynamo Moscow were represented at the Germany Cup.

3. At the moment, Russia U20 are competing in the Super Series against Canadian teams. To date, the team have played against the WHL (0:7, 4:3) and the OHL (4:2). However, another Russia U20 team participated in the Four Nations in Balashikha. The players lost to Sweden 1:5 in the opening game, but they then beat the Czech Republic 2:1 in overtime and Finland 2:0 to finish in second place. In the media, there were always reports stating that Russia, unlike Canada, have trouble putting together a national team because of a lack of players, but in the past few years, we have proven that we can form two strong senior and junior teams which can win matches against leading countries.

4. Both the senior and junior women's national teams did well at their tournaments. The senior side defeated the Czech Republic 3:1, Germany 6:1 and Switzerland 3:0 in Dmitrov, while the junior team saw off Finland 3:1, Germany 3:0 and Sweden 4:0 in Stupino. Both tournaments were the Four Nations. These victories are a confidence booster ahead of the Olympic Games for the senior side, and for the World U18 Women's Championship.

5. Unfortunately, the under 17's couldn't show their full potential. Following confident World Challenge Cup victories against Finland 6:4, Sweden 4:1 and Canada Red 5:3, the team lost in the quarter-finals to the Czech Republic 3:4. The players claimed fifth place after defeating Finland 5:4, however the team will draw the needed conclusions when preparing for the World U18 Championship in 2019.

6. Russia U16 performed excellently at the President's Cup in Belarus, winning the trophy. The team defeated Slovakia 8:0, Latvia 4:1 and Belarus 4:1. All of the opponents were a year older.