Russia U18 have started training on the ice 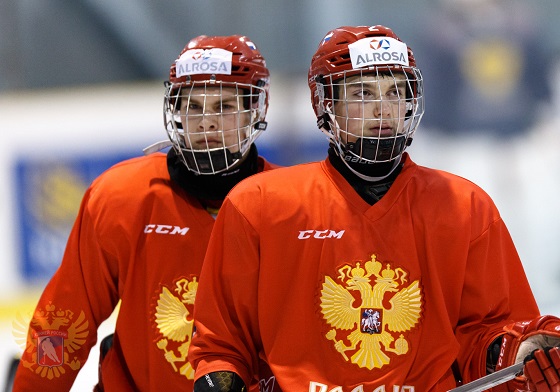 In Moscow Region, the under 18 Russian national team are continuing to train. Having worked out off the ice for the first week, the players have now begun skating.

- During the first week of training, we worked out outside. Has it been tough after the summer break? No, I wouldn't say that. Some of us training during the holidays, while others haven't. Personally, I worked a lot over my skating. There are good facilities here, the rink is good and we can focus on the task at hand. On Sunday, we had an excursion in Tsaritsino, and we really enjoyed it.

- Despite working hard during the summer, I have missed training. So far, it hasn't been very tough, we begun our training off the rink. The coaches understand what is required for us to get back in shape. We're staying in Orekhovo this time, and it's a nice place, the Tsaritsino park isn't far away.

- The first week of training wasn't that hard, I have positive impressions. Yesterday, we finally started skating on the ice. In the summer, I didn't skate for two weeks. Now, the main thing is to give everything and show that we're worthy of playing at the Ivan Hlinka memorial tournament in August. At that competition, we will try to win.