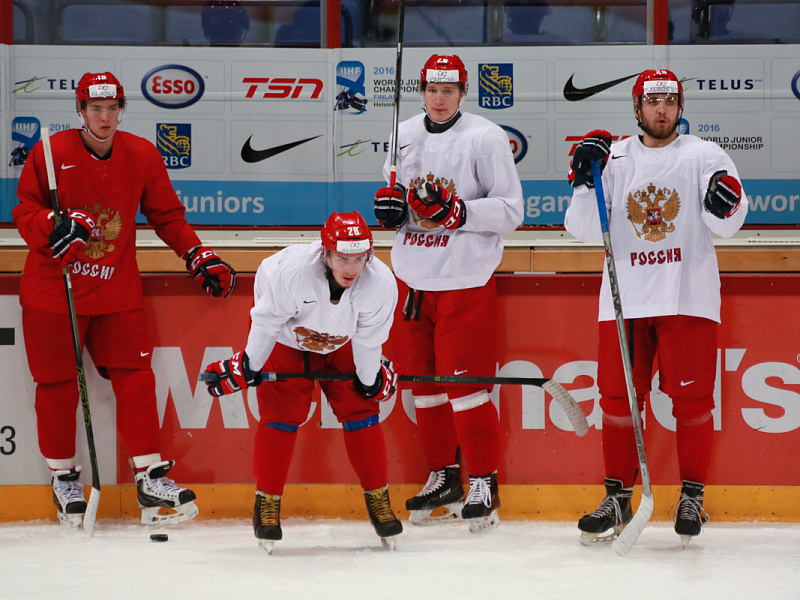 The 2016 IIHF World Junior Championship has reached its crucial phase, and Russia will compete in the quarter-finals against Denmark.

Today's opponents Denmark weren't expected to make the play-offs, but in a tough group with Canada, America, Sweden and Switzerland they managed to take third place ahead of the Swiss. Their only win came against Switzerland 2:1, however despite that success they were brought back down to earth by the rest losing to Canada 1:6, Sweden 0:5 and America 1:4. Goaltenders Mathias Seldrup and Thomas Lillie have 90.20% and 91.55% save percentages respectively, and their top scorers are Mathias From and Alexander True with two a piece.

On the eve of this match, Denmark head coach Olaf Eller had this to say:

- It's a quarter-final, but look how the Russians play and train. If you compare two training sessions together, they are of completely different levels. Nevertheless, I hope it will be an interesting game and that we will not lose 0:8. It will be a tough test for us, and it will be good for the growth of our team.

Russia were seamless during the group stages, defeating the Czech Republic 2:1 SO, Finland 6:4, Belarus 4:1 and Slovakia 2:1. Alexander Georgiev has started three of those matches, and he has been impressive holding a 92.31% saves percentage. All lines have been effective, but the Lokomotiv link up of Pavel Kraskovsky, Alexander Polunin and Egor Korshkov has been particuarly dangerous.

The Russia - Denmark match will begin at 15.00 local time inside the Hartwall Arena, Finland, Russia. Match TV and our site will have live broadcasts of the match, while a text broadcast will be available on our official Twitter account.