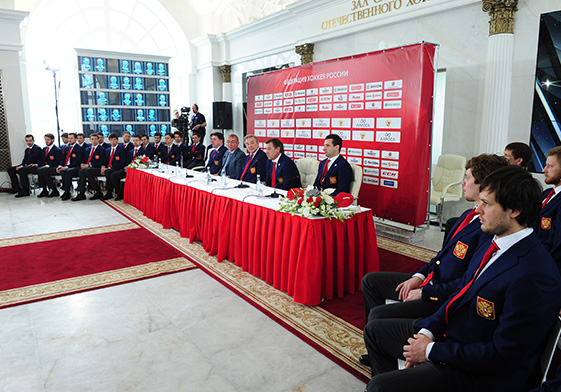 - We have tried to bring our best young and experienced players together. At this tournament, we should play good hockey that our fans will enjoy. It's more difficult to play at home, and despite the roars for us to power forward, we should play with cool heads. A home World Championship is a big event for our players. During this year, we will celebrate 70 years of ice hockey in the country, and we hope that this team can keep our winning traditions going.

- It's a huge honour for our company to be the title sponsor of the Russian Ice Hockey Federation. We hope that our team will perform successfully at the World Championship, and that we can continue cooperating together for a long time.

- The ice hockey's hall of fame and museum's story began in 2013, when the Russian president gave his approval. In 2014, the RIHF co-assisted us in holding the first ceremony inside the hall of fame. Now, work over the hall is ongoing. It's symbolic that this procedure is taking place here, as the players can feel our ice hockey history.

These following 28 players have been included in the initial squad: