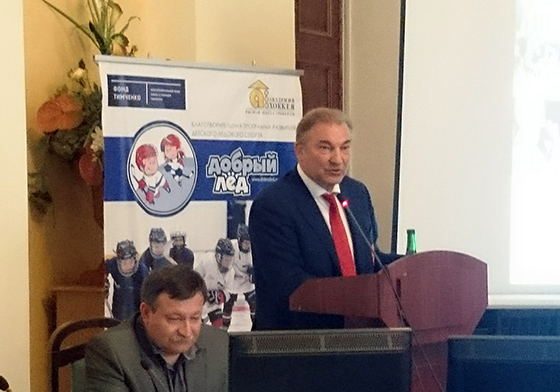 - In the Russian Ice Hockey Federation, we play a lot of attention to the forming of coaches. It's important that native coaches, especially those who work in youth ice hockey, were taught using modern technical and methodical programs. It's good that during the 2016 World Championship in Moscow and Saint Petersburg the IIHF coaching symposium and the Hockey Future forum are being held, as our coaches can get to grips with new ice hockey tendencies.

This is the third Hockey Future forum, and it has been organised by Elena and Gennady Timchenko's charity and the Russian Ice Hockey Federation. It is being held in the Lesgaft University until the 18th of May. The main topic is the transformation between youth and senior ice hockey.

In the forum, there will be a conference concerning relevant issues surronding the preparation of coaches, master-classes with famous Russian and foreign ice hockey coaches, attending and analysing 2016 World Championship games, and table discussions about modern ice hockey.

The event is behind held at the Lesgaft University, at the Yubileyny Arena and the Krasnaya Zvezda complex.

In memory of Alexander Sidelnikov
On August 12, Olympic gold medalist and two time world champion Alexander Sidelnikov would have turned 70 years of age.
Federation
89 years since Genrikh Sidorenkov's birthday
Today on the 11th of August, legendary Soviet defenseman and one of the first USSR Olympic champions Genrikh Sidorenkov would have been celebrating his 80th birthday.
Federation
Yury Khmylyov is 56!
Yury Khmylyov, a 1992 Olympic champion, is celebrating his 56th birthday on August 9.
Federation
96 years since the birth of Nikolai Sologubov
Nikolai Sologubov, a winner of the 1956 Olympic Games and the 1956 and 1963 World Championship, would have turned 96 years of age today on August 8.
Federation